When Spiders Move In

Learn about the most common spiders that make your Massachusetts home their home.

What comes to mind when you think of spiders? I’m willing to bet it’s not Charlotte weaving messages into her web and generally minding her business. You're probably picturing the campy horror classic Arachnophobia-- or more simply, a flamethrower. While fear of spiders is understandable (I mean, seriously, just look at them), in our region of the country, it’s rare for the eight-legged invader you spotted in your house to be dangerous. So step down off the kitchen table—or don’t, no judgement here—and read up on the most common spiders in Massachusetts homes. 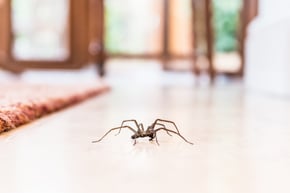 The common house spider is generally a dull brown color, with some markings of different shades. The body is usually about ¼” long, but with legs included this spider is about an inch across. They prefer to blend into the background and are the common culprit of the fluffy webs in the corners of rooms. While the house spider is capable of biting humans, it is not known for being aggressive. Unless you’re a fly, mosquito, ant, or other small insect, you’re safe if you keep your distance, and I know I don’t have to tell you twice.

The spider that may cause the most alarm is the wolf spider. These guys are bigger and hairier than most other spiders that enter homes, and occasionally get mistaken for small tarantulas or even brown recluse spiders. They can grow to about an inch and a half in length and are gray or black with brown hairs. Although wolf spiders are swift hunters, when it comes to predators or larger animals (read: humans), they prefer flight to fight.

Another spider you probably recognize easily is the daddy long legs. Maybe yours truly was a bit of an odd duck as a kid, but I remember picking them up in the yard and even attempting to domesticate one-- Hey, I didn’t judge you earlier! The aptly-named daddy long legs has a small, peanut-shaped body and very thin, delicate legs. You might have heard a rumor that they are the most poisonous spider in the world but are unable to bite humans. It’s simply not true. So while you may have no desire to befriend one, you can rest easy knowing they are not a threat to you.

In short, common spiders in Massachusetts may pose minimal risk to people, but that doesn’t mean they’re welcome house guests. Burgess Pest Management can rid your home of spiders and other pests that might be drawing them in. So put down the matches and call us for a free estimate. We’ll be there before you can say “eight legged freaks”.