It's probably fair to say most people don't enjoy pests, but for some, the discomfort goes way beyond "yuck".

Fun fact: Many years before yours truly tripped and fell into pest management, I attended college with a major in psychology. For approximately a thousand reasons, I ended up changing course, and thank goodness I did, because otherwise I wouldn’t have this head full of random and disgusting pest facts! But I digress. Much of my coursework focused on anxiety and phobias—and there are plenty of both in the world of pests. 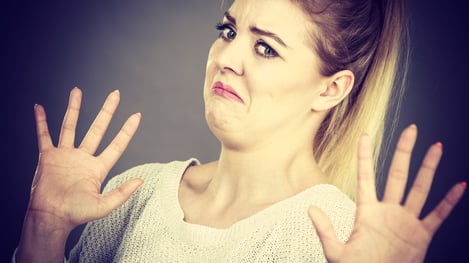 There are several phobias specific to certain pests, and many are, quite frankly, understandable. Here’s a brief list of some of the most common pest phobias:

Arachnophobia: Fear of spiders. This is without question one of the most common phobias out there. If you don’t have it, you probably know someone who does. People with arachnophobia aren’t just petrified of spiders, though—this phobia also encompasses fear of scorpions, ticks, and mites.

Muriphobia/Musophobia: Fear of rats and mice. This phobia covers a range of specific fears, from the simple sight of a mouse or rat, to the feel of their fur, to being bitten—or all of the above. We at Burgess certainly understand what’s scary about mice and rats, but probably from a very different perspective.

Katsaridaphobia: Fear of cockroaches. Definitely understandable. Anyone would feel some level of anxiety when near cockroaches or entering areas where they might live, but for sufferers of katsaridaphobia, the mere thought of a single roach can trigger a panic attack.

Entomophobia: The fear of any number of insect classes. This one probably explains itself. But don’t worry, if you’re terrified of insects in general, there’s something we can do to protect your home from any type of insect invasion.

Acaraphobia: Fear of insects that cause itchy bites. This could include ticks, mosquitoes, bed bugs, and lice, among others. Some say this fear can stem from having dealt with an infestation of bed bugs or lice in the past.

Entonophobia: Fear of ticks. Ticks aren’t cute, and they carry diseases that affect people and pets. With recent news headlines, a healthy fear of ticks is understandable, but for those with entonophobia, rational avoidance becomes crippling anxiety.

Isopterophobia: Fear of termites or other insects that consume wood. Believe it or not, some people are more afraid of the actual insects than the damage they can do to a home.

Whatever pest it is you fear the most, Burgess Pest can help make sure they keep their distance. Our technicians may not wear capes, but not all heroes do. Call us today for a free estimate in your Massachusetts or Rhode Island home.