How Mice Can Spread Lyme Disease

Ticks aren't the only culprit of Lyme disease in Massachusetts- this one might surprise you.

It is estimated that each year, 87,000 people  in Massachusetts alone are infected with the bacteria that causes Lyme disease. Knowing this, it’s important to be aware of the many factors that contribute to the spread of Lyme. It’s a surprisingly complicated disease, with many facets that may shock people. 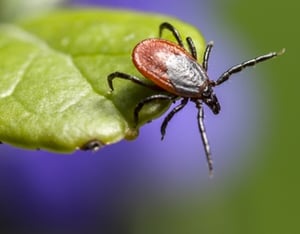 When presented with the words “Lyme disease”, a few things typically come to mind: ticks, deer, and the outdoors. These are accurate and obvious connections-- But what if I told you it’s possible to contract Lyme disease without even leaving your house? And what if I told you mice could be the culprit?

Ticks will feed on many hosts in their lifetime, and for immature ticks, rodents are easy prey. Deer mice, or white-footed mice, are often the source that passes the Lyme disease bacterium to the tick. As the infected tick grows, so does its host preference, at which point it passes the bacteria to deer and, if the opportunity arises, humans.

But a tick doesn’t have to be full-grown to affect a person. As human populations grow, our homes are expanding into forested areas, making us more vulnerable to rodent infestations. If a deer mouse should enter your home, it may be carrying dozens of infected young ticks that may fall off and choose a person or pet for its next meal. These larval ticks are barely the size of a poppy seed and could go undetected while they transmit the Lyme disease bacteria to a person.

It’s probably not the news you wanted, but it’s the information you needed. Protect yourself from ticks whether you’re an outdoor enthusiast or a bit of a couch potato. Burgess Pest offers a range of year-round service plans, including coverage for both ticks and mice. Call or email us for more information and let us help Protect Your Pad.