This time of year, close encounters with rodents are common.

While there are methods of do-it-yourself rodent prevention and control, it’s always advisable to leave it to the experts. One reason for letting a pest professional take care of a rodent problem: Mice and rats can spread diseases to humans. Here’s a quick overview of the health hazards rodents in Massachusetts pose to people. 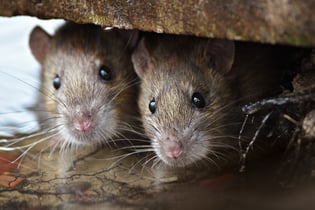 Hantavirus. This virus can be transmitted in many ways, but is mainly passed to people when rodent waste or nesting materials are disturbed, allowing the virus to become airborne. Hantavirus can also be spread by rodent bites, or eating food contaminated with their droppings, urine, or saliva. This infection can progress to Hantavirus Pulmonary Syndrome, a respiratory illness that is sometimes deadly. While there is currently no specific treatment for Hantavirus infection, early medical intervention often provides the best odds of recovery.

Plague. You’re probably familiar with the phrase “avoid it like the Plague”. Well, avoid contact with rodents like the Plague, because it’s not just a Medieval threat. Plague bacteria is most frequently spread by infected fleas, but can also be transmitted through direct contact with rodents or their body fluids. Pneumonic plague, the only plague that can be spread person to person, is typically developed after inhaling the bacteria. While Plague is very serious and can be deadly, it is treatable with early detection and medical attention.

Rat-Bite Fever. As its name indicates, rat-bite fever is contracted from a bite or scratch from an infected rodent. It can also be transmitted via contact with a dead rodent or consuming contaminated food or water. With proper treatment, full recovery is likely, but untreated rat-bite fever can be fatal.

Lyme Disease. Mice can indirectly spread Lyme disease to humans. White-footed mice in particular carry the bacteria that causes Lyme disease. Ticks that feed on mice carrying this bacteria can then pass it along to a human host. Where the mice go, the ticks go, which means if you have mice in your house, you could have ticks too.

These are just four of more than 35 known diseases spread by rodents. Knowing this, wouldn’t you rather let the pros handle an infestation? Burgess Pest has nearly a century of experience in rodent control, so call us for an estimate. We’ll safely eliminate rodents from your home and make sure they don’t come back.