Spiders Getting Cozy in Your Dedham, MA Home

Even if you're not afraid of spiders, you probably don't want them hanging around your house. While that's completely understandable, it's important to keep in mind that it is rare for the spiders roaming your Dedham, MA home to be dangerous. Here's an overview of common household spiders in our area. 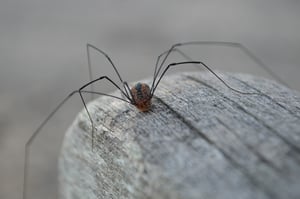 With arguably the most creative name of all, the common house spider is usually a dull brown color, with some markings of different shades. Despite a small body approximately ¼” long, measuring with legs included this spider is about an inch across. The common house spider prefers to fly under the radar and is often to blame for the slightly fluffy webs in the corners of rooms. The house spider is capable of biting; however, it is not known for aggressive behavior. Generally speaking, unless you’re a fly, mosquito, ant, or other small insect, you can rest easy.

The wolf spider may be the most fear-inducing of the common spiders. They are larger and hairier than most of their home-invading cohorts, and are sometimes mistaken for small tarantulas or even brown recluse spiders. Wolf spiders can grow to about an inch and a half in length and are gray or black with brown hairs. Although these arachnids are skilled hunters, they prefer flight to fight when it comes to confrontations with predators (AKA humans).

Perhaps one of the most recognizable spiders is the daddy long legs. The aptly-named spider has a small, peanut-shaped body and long, thin legs. You may have heard a rumor that they are the most poisonous spider in the world but are unable to bite humans. This is simply not true. You don't have to befriend them, but you don't have to be afraid of them either.

To sum it up, spiders in your Massachusetts home are unlikely to pose a threat to you or your pets. That said, it is unpleasant sharing your living space with uninvited guests. The Burgess Pest team can evict spiders and other pests that might be drawing them in. Put down the flame thrower and call us for a free estimate!